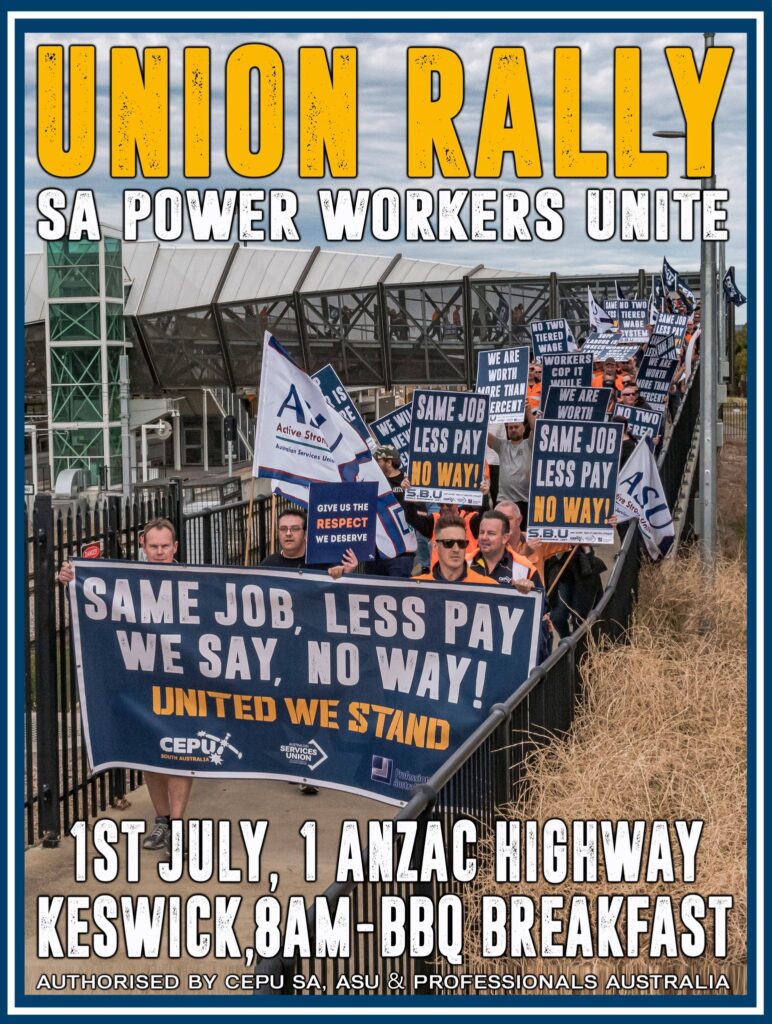 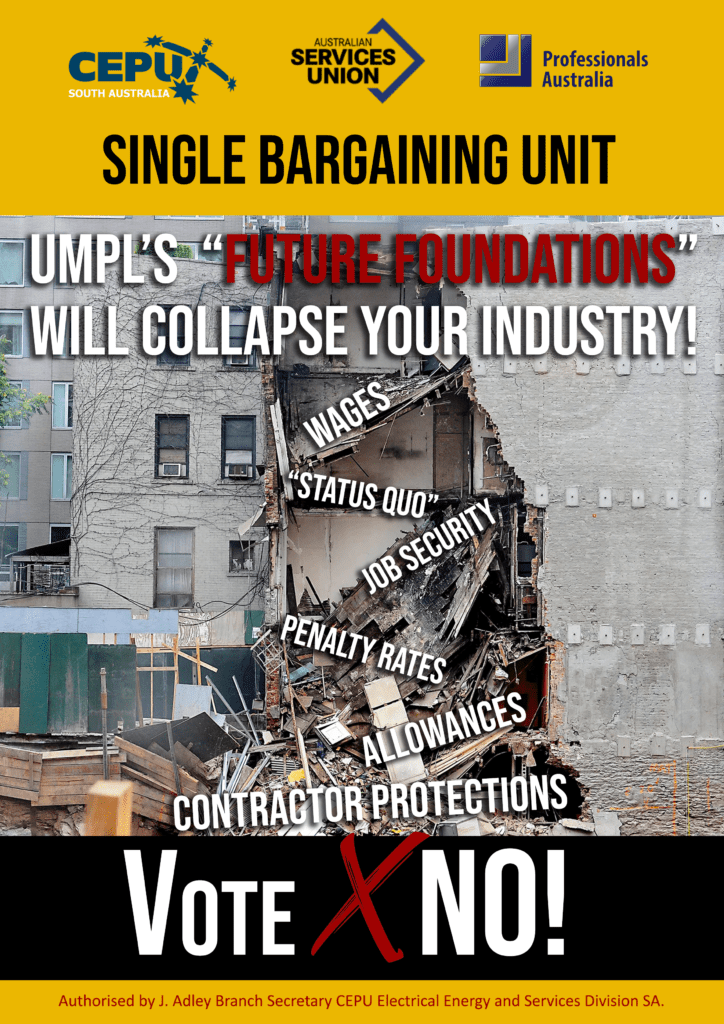 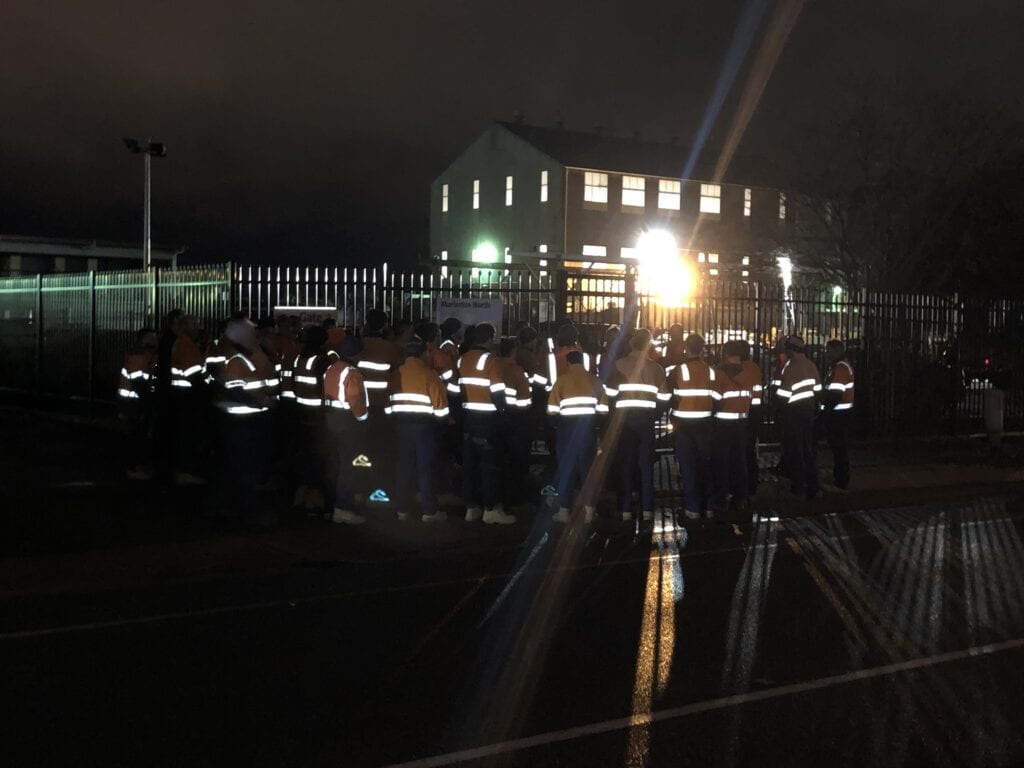 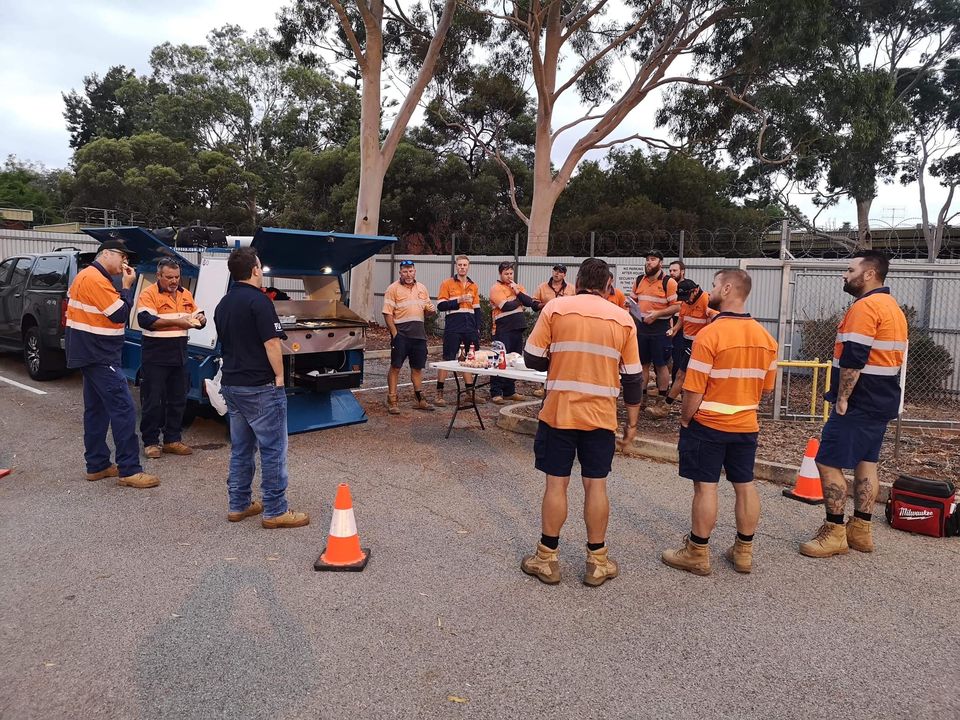 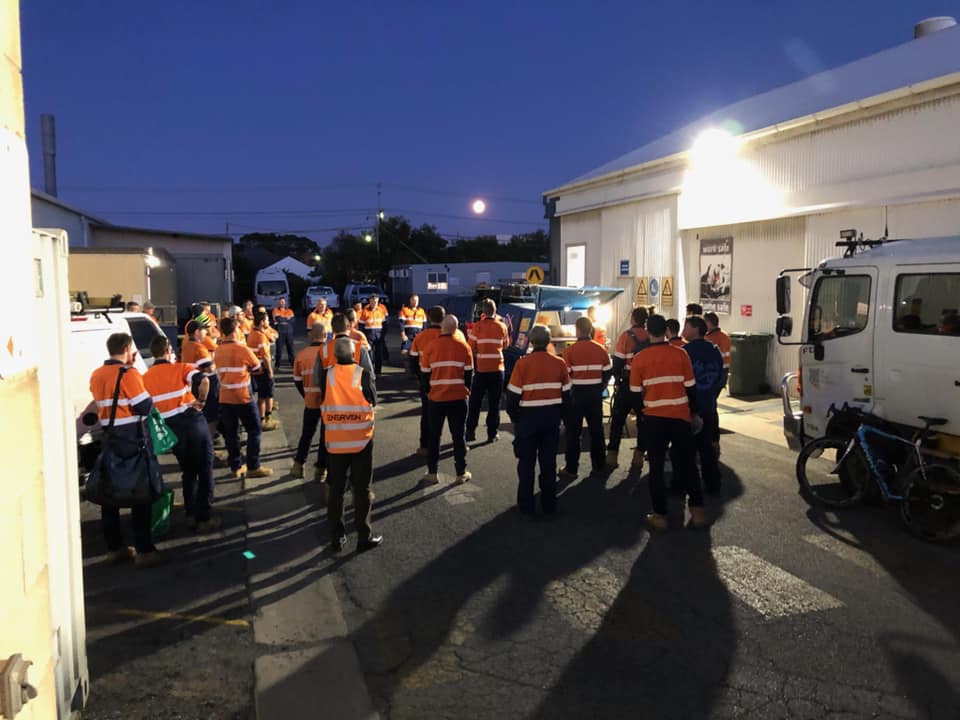 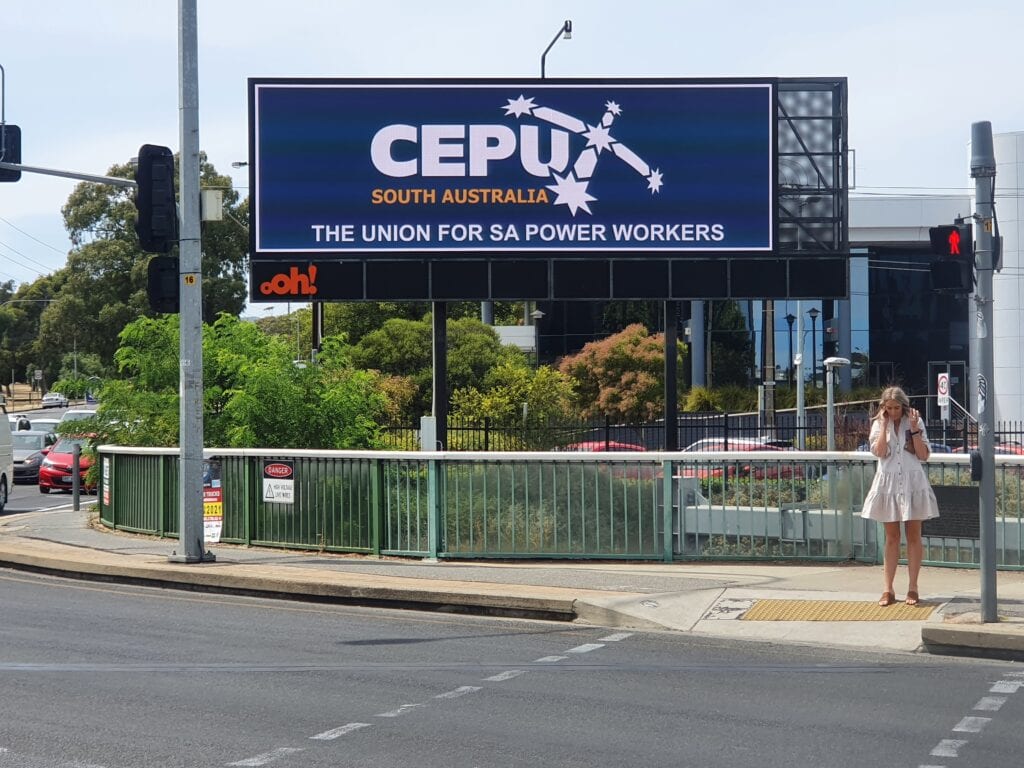 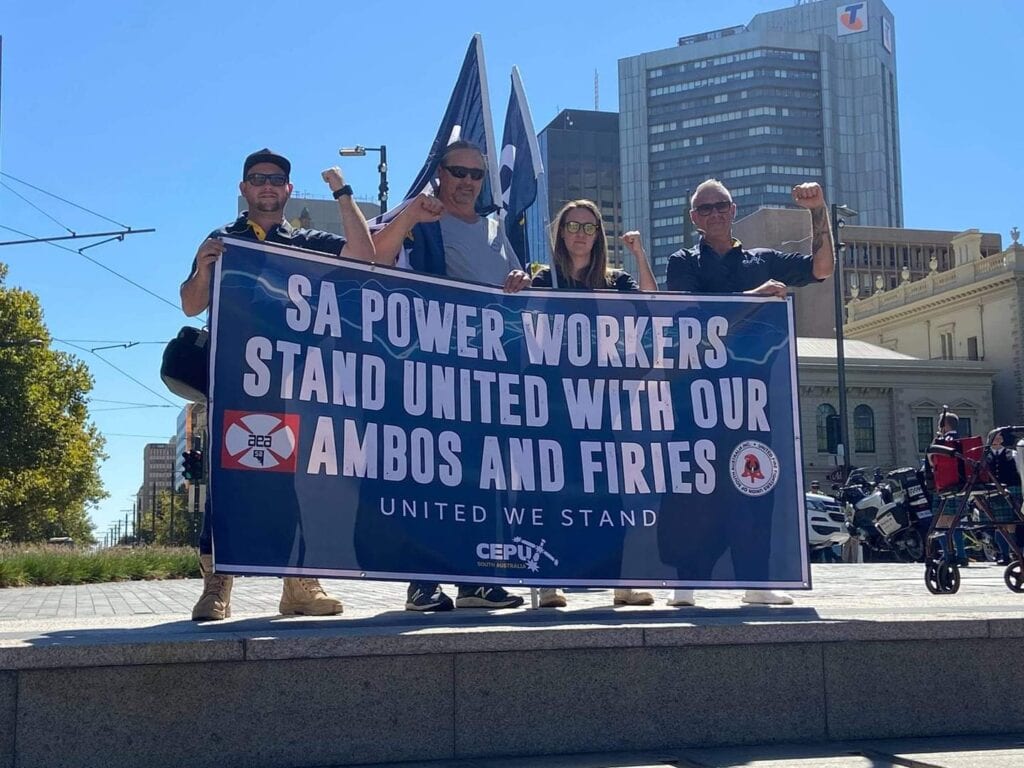 The Story So Far

The Unions representing workers at SA Power Networks and Enerven form a Single Bargaining Unit (SBU) made up of the Communications Electrical and Plumbing Union (CEPU) the Australian Services Union (ASU), Professionals Australia and the Australian Manufacturing Workers Union AMWU.

SA Power Networks and Enerven workers are covered under the same enterprise agreement and are employed by the same corporate entity, Utilities Management Pty Ltd.

The SBU has been attempting to bargain with Utilities Management Pty Ltd  since early 2020 to reach a new fair and reasonable enterprise agreement.

The CEPU has placed a ban on all work outside ordinary hours (excluding emergency works) starting on the 8th of June as a part of the ongoing campaign to achieve fair wages and conditions for workers in a timely manner.

SA Power Networks/Enervens resistance and avoidance of bargaining has caused an unreasonable delay in negotiations. The Unions and workers have only sought a reasonable outcome from the beginning, however SAPN/Enerven are attacking the wages and conditions of future and current employees despite their continuing profit.

While workers braved the storm that went through South Australia on the 25th of May, working hard to restore power, SA Power Networks/Enerven continued their attack on the job security, wages, and conditions of these essential workers.

South Australians should be asking why the Executive Management Group at SA Power Networks/Enerven is intent on going after their workers wages and conditions, despite the fact their hard work delivers profit for the business, and power to state.

To coincide with the stoppage there was a high visibility activity held outside the SAPN/Enerven head office on ANZAC Highway, with a BBQ breakfast afterwards in the parklands opposite.

For more information read our updates.

Footage of the activity is on our videos page.

The Single Bargaining Unit called a 4 hour stoppage on Thursday the 6th of May in response to SA Power Networks / Enervens intention to drastically reduce the wages and conditions for new and existing employees.

The rally was well attended and members heard from their fellow workers, Union representatives, and interstate power workers regarding the proposals from SAPN/Enerven. 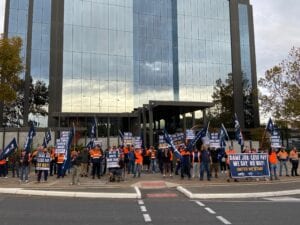 There is also a footage from the rally on our videos page.

As of the 6:00am on the 14th of April the CEPU issued a ban on the performance of temporary higher class duties and secondments.

The use of temporary higher class duties and secondments has been growing exponentially over the years and has become one of the leading issues in these negotiations.

Under the enterprise agreement secondments should only be used when there is no suitable worker to fill a vacancy, and the seconded workers is provided a training plan with the intent of ensuring the seconded worker will obtain the required skill to retain a full time position in the role. However the way this has been occurring in reality is workers being seconded indefinitely, which also creates a cascading effect of secondments into their former position and so-on.

For more information on THCD/Secondment bans see our Updates.

In response to SA Power Network/Enerven’s radical log of claims and as part of our campaign to reach a fair and reasonable enterprise agreement outcome that is acceptable to our members, industrial action was notified and took place on the 1st of April 2021.

The industrial actions include:

Work to rule – strict adherence to performing work in accordance with employee role descriptions and all workplace directives and procedures.

A 4 hour stoppage of work (strike) – Union members will be ceasing work 4 hours prior to their scheduled finish time on Thursday the 1st of April. 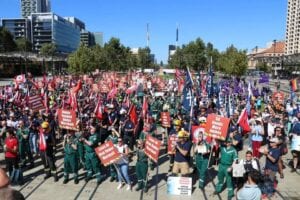 The SBU encouraged any SAPN and Enerven workers taking part in industrial action to attend the rally and support the firefighters and ambulance service workers who support our community. 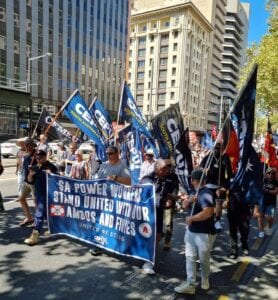 Further industrial action may be called for depending on progress made toward reaching a fair and reasonable enterprise agreement outcome that is acceptable to our members.

At the bargaining meeting held on Tuesday 23 March Utilities Management Pty Ltd tabled a radical Log of Claims that includes lower wages and allowances for workers employed under the enterprise agreement. The company’s claims also include provisions that threaten employees job security by removing limitations and conditions around the use of labour hire and contract workers.

After a prolonged period of Bargaining and no progress whatsoever, SA Power networks calling a cease to bargaining left the workers with very few options.

The unions held discussions with members and delegates/reps to gather feedback on what options were preferable. Protected Industrial Action was raised as a possibility and to confirm this, the unions surveyed their memberships to test the option. The membership responses came back 95% in favour of using Protected Industrial Action to get the employer back to the Bargaining table and to get some genuine bargaining happening.

This may seem extreme to some, but in the view that SA Power Networks had not moved at all on any issues whatsoever in the 7 months of bargaining, even the most company minded of workers were now seeing this as a reasonable consideration.

The Protected Action Ballot Applications were lodged on Tuesday the 23rd of February 2021, after SA power Networks had confirmed in writing to the unions that they had decided to cease bargaining and refused in writing to meet to continue negotiations.

The current Enterprise Agreement that is in place at SA Power Networks/Enerven has a Renegotiation Clause.

This clause says that the parties to the Agreement will work collectively with the aim that a new agreement is established by the expiry of this agreement. The current agreement has now expired and while this is not a breach of that clause, we believe that the fact that SA Power Networks/Enerven have walked away from bargaining is definitely not in the spirit of this clause. This is why we have applied for the South Australian Employment Tribunals assistance in this matter.

The unions lodged an application to the Fair Work Commission to deal with a Bargaining Dispute once SA Power Networks unilaterally declared that they had decided to cease bargaining for a replacement Enterprise Agreement.

This application was lodged because the unions saw this move as a breach of SA Power Networks “Good Faith Bargaining Obligations” under the Fair Work Act.

The only way bargaining can cease once it has been commenced, is by agreement or when an agreement is made – as a result of the workers voting in favour of a proposed Enterprise Agreement. Until this happens, the bargaining must continue and the parties to the bargaining must follow their “Good Faith Bargaining Obligations” as per the Fair Work Act 2009.

There had been 2 votes on the company’s offer, both times the workers had voted to reject the deal.

The unions had been asking SAPN/Enerven for a negotiating meeting since mid-December. On January 12 2021 SAPN replied, saying they were not available to meet to negotiate until February.

At that bargaining meeting, held on the 5h of February, via Microsoft Teams, the SAPN/Enerven Bargaining team read verbatim from a document to announce that the company had decided to cease bargaining. The meeting was over in less than 10 minutes.

This was a complete surprise to the employee bargaining representatives. By this time, the employee Bargaining reps had spent many weeks conferring with members over the initial offer, our log of claims and the follow up feedback from SAPN. The bargaining had not ceased as far as we were concerned.

Following this move by the company, the workers had very few options left in their effort to get a fair and reasonable outcome to Enterprise Agreement Negotiations. The 2 remaining options being:

Also, as a result of a strong direction from their members, the ASU, the CEPU and Professionals Australia lodged a Protected Action Ballot Application with the FWC. This was heard on the 25th of February. Please see the PAB Application Tab for the details. 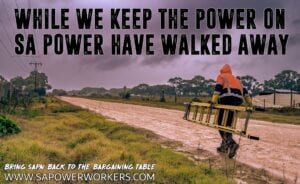 Our Log of Claims outlines the issues that have been present around the business over the duration of the 2018 EA.

The campaign for the new EA has this as a major keystone, as without true negotiation, there will be no change for the better in relation to these issues that are boiling in the background.

We need SA Power Networks to come back to the table and genuinely attempt to understand workers issues that have given rise to the Log of Claims and work with us to address these claims. Businesses the size of SA Power Networks and Enerven should have an interest in ensuring workers feel they are listened to and empowered to take on and rectify problems.

The unions toured the whole State from Pt Lincoln to Mt Gambier, and most locations in between, talking to as many workers in as many locations as possible. Our aim was to get the widest breadth of feedback from our members as we could.

Our memberships were ok with he 12 month EA that maintained the status quo – as long as the status quo was also maintained with regard to wage increases. The feedback was clear, a 12 month term with a 3.5% would get the deal done. 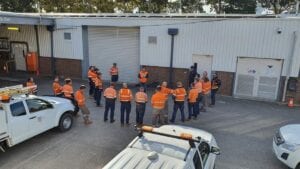 The second Bargaining Meeting was on 14-7-2021, held via Microsoft Teams. The unions delivered the feedback of the members, that the company offer was not acceptable.

With a loss of 4% for the bonus a 1.5% increase to pay rates was not acceptable.  This meeting ended pretty quickly after that feedback was delivered.

The 3rd Negotiating Meeting was held in the CEPU offices, at this meeting SAPN brought out their charts and graphs to try and justify the 2% 12 month deal as a “good deal”.

At the end of that meeting, the unions put to SA Power Networks that a majority of the workers would accept a 12 month EA as long as it maintained an annual pay rise of 3.5%. The unions also stated that if this wasn’t agreeable  to SA Power Networks, the unions will consult with members to compile and endorse a Log of Claims to  prepare for bargaining in the usual manner.

This deal was not to the workers liking for the following reason.

The workers had just had their yearly bonus taken away, this bonus was not enshrined in the Enterprise Agreement, so the company was able to “retire” the scheme, this represented a negative ~4% hit for the workers.

The workers asked SA Power Networks if management had lost their bonuses too, the response was that management didn’t get bonuses but management retained their “at risk remuneration” packages.

There had been major industrial issues for the workforce across the duration of the three year current agreement, these issues include rostering, job descriptions (indicative tasks) being 30 years old and no longer fit for purpose, the over use of Temporary Higher Class Duties, manning levels not sufficient for workload – especially in the regional areas and many more.

These issues are reflected directly in the Log of Claims. With no prospect of having these issues fixed with the 12 month 2% offer, the workers were not inclined to put these issues off for another 12 months.

Negotiations started on June 26 2021. This meeting was the opening presentation, a meet and greet between the SA Power Networks/Enerven Bargaining Team and all of the various Bargaining Representatives.

During the meeting the Bargaining Representatives told the SAPN Bargaining Team that there were a lot of issues that relate to the Enterprise Agreement that our members were wanting to have discussed and negotiated, A proposal was made by the Bargaining Representatives to form an “Industrial Consultative Committee” to deal with these issues through the duration of the proposed 1 year Enterprise Agreement.

Join the campaign for a fair go – Join your Union.